Here is our selection of 10 must-sees in the Castle of Prague. 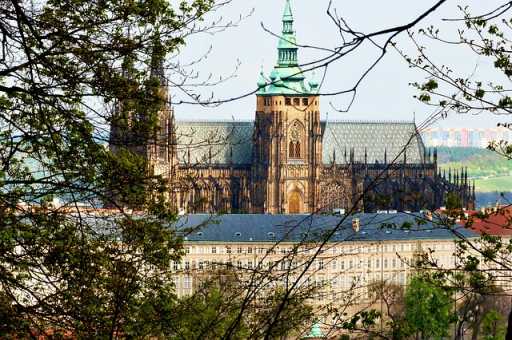 Here is our selection of 10 must-sees in the Castle of Prague.

According to the Guiness Book of Records, Prague Castle is the largest ancient castle in the world. This impressive complex of buildings is so big that the choice of what to see might be overwhelming. Below is a list of the sites of Pražský hrad that you shouldn’t miss:

This is where the castle begins. The first thing that catches your eye is the beautiful entrance gate decorated with the wrestling titans. It’s a symbolic link between Prague and Vienna which has a similar motive in Hofburg. In fact, both cities used to be the capital of the Holy Roman Empire in the past for which the culture of Ancient Rome was an important source of inspiration.

Then there are two poles with flags of the Czech Republic and of the European Union and another beautiful piece of Baroque architecture, the Mathias Gate, dating back to the early 17th century. Before the incorporation into the castle it used to be a self-standing triumphal arch of the Habsburg dynasty, who ruled the Czech lands between 1526 and 1918. In the upper part of the arch, you can see the emblems of all the hereditary Habsburg lands at the time (from the left: Upper Lusatia, Luxembourg, Austria, Bohemia, [Habsbourg dynasty sign], Hungary, Moravia, Silesia, Lower Lusatia). 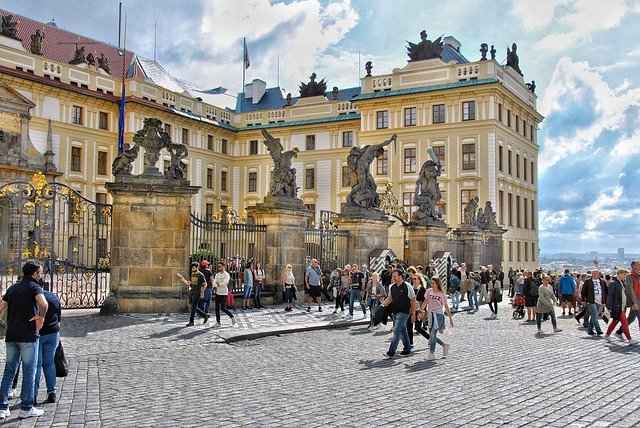 The Second Courtyard is surrounded from all sides by Baroque or Classicist architecture dating back to the times of Maria Theresa, the Austrian Holy Roman Empress who in the 18th century turned Prague Castle into a fancy palace. In the center of the Second Courtyard stands the impressive Baroque Kohl’s Fountain adorned with 2 lions, 2 tritons and four antic gods (Mercury, Vulcan, Neptun, Hermes). Next to it you can find a nice Baroque cage, which is simply a well (14 m deep!). Visitors can explore two exhibitions here. The northern wing contains the Prague Castle Picture Gallery with an interesting collection of over 100 Renaissance paintings (including works by Titian, Aachen and Rubens).

The southern part of the courtyard hosts the Holy Cross Chapel (white round structure in the picture) with the exhibition called the Treasure of St. Vitus. It is a unique collection of 139 priceless objects, like richly decorated reliquaries, monstrances or other liturgical objects, most of them made of pure gold or gilded silver. One of the exhibits is a golden cross with the remains of the loincloth of Jesus Christ. 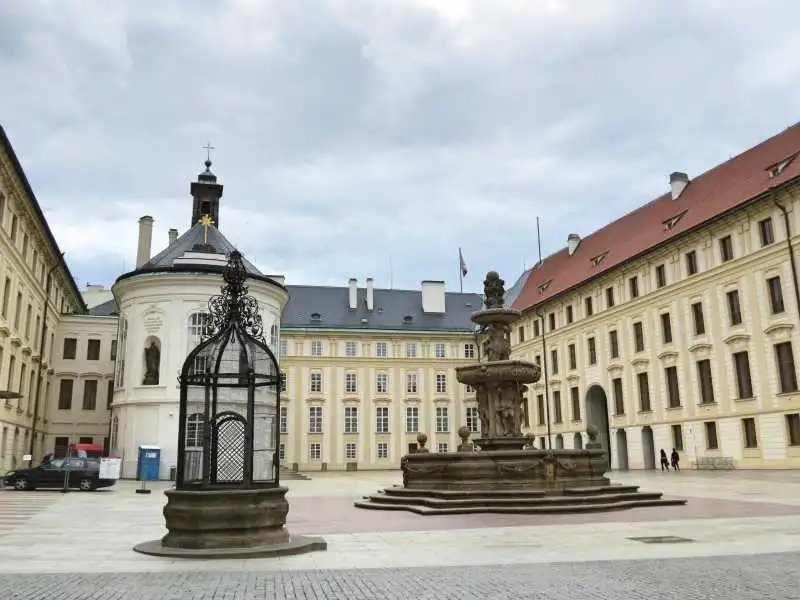 The Third Courtyard is the biggest and the most instagrammable part of Prague Castle. You will find here some of the most important sights of the castle like the Cathedral of St. Vitus, the Old Royal Palace or the office of the president of the Czech Republic with an elegant Rococo balcony, from which the president speaks to the public on special occasions.

Other interesting sites include the 16 m tall Obelisk commemorating Czechoslovak legionnaires, the 14th century Statue of St. George slaying a dragon and the spectacular 14th century Southern Portal of the Cathedral of St. Vitus with the stunning mosaic of the Last Judgement. There is also the Old Provosty (the pink house adjacent to the Cathedral) with the preserved foundations of, amongst others, the Romanesque Chapel of St. Maurice , demolished in 1880. 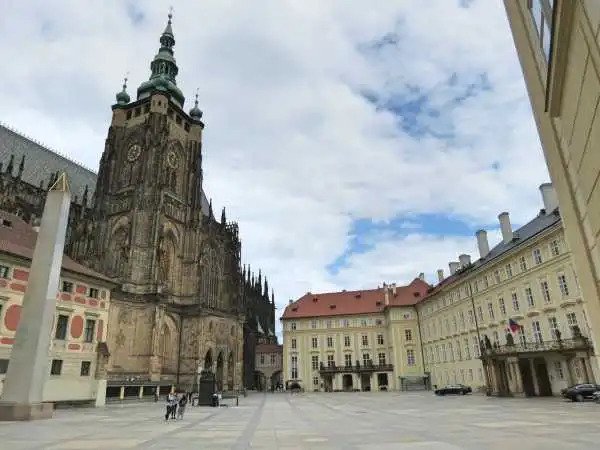 The Cathedral of Saint Vitus is the most important church in the country. It is the place where the Czech kings and emperors used to get married, this is where they were crowned and in the end where they got buried in the crypt. That includes the Holy Roman Emperor Charles IV whom you can see on the facade on the right from the giant rose. The interior of the Cathedral is available from 9:00am to 3:40 am (4:40 in the winter season) and it is spectacular.

For free you can enjoy the High Gothic vaults and beautiful stained glass windows. Don’t miss the third one from the left, which is designed by Alfons Mucha, the greatest Czech artist from the Art Nouveau period. It depicts the mission of Saint Cyril and Methodius, who build the foundations for Christianity in the Czech lands in the 9th century CE.

If you buy the ticket, make sure to visit the Chapel of Saint Wenceslas decorated with hundreds of gems. You will find here the tomb of the most important Czech patron saint as well as a tiny door behind which is kept the country’s biggest treasure - the crown of St. Wenceslas.

After visiting the interior of the cathedral we also recommend climbing the 287 steps of the tower to admire the spectacular panorama (the entrance is from the southern side). On your way up you will be able to see Siegesmund, the biggest bell in the Czech Republic, weighing around 16.5 tons. 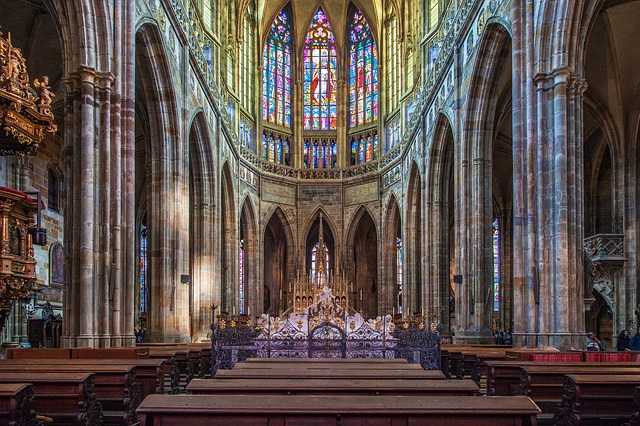 The Old Royal Palace is one of the first buildings in the castle constructed for the first dukes of Bohemia from the Premyslid family in the 10th century. In the 14th, 15th and 16th century it underwent major reconstructions which made it what it is now, an interesting mix of late-Gothic and Renaissance architecture. The top attraction of the Old Royal Palace is the Vladislav Hall, a huge throne chamber with amazing flower-like Gothic vaults and big rectangular Renaissance windows flooding the room with light. Other interesting parts of the palace include the All Saints Chapel with the tomb of St. Procopius, the Old Diet Room where the state assemblies used to take place, the Bedchamber of king Vladislas, with another amazing ceiling, the New Land Rolls Chamber with coats of arms of royal officials covering the room, and the old Czech Chancelry, where in 1618 happened the Defenestration of Prague. The entrance to the Old Royal Palace is paid as part of Circuits A and B. 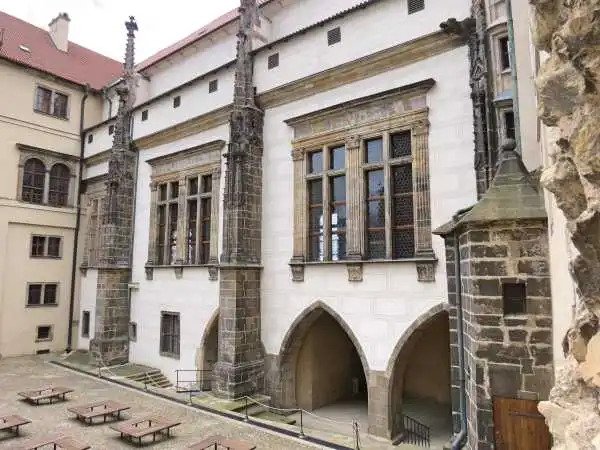 The Basilica of Saint George was constructed in 920 and some of the early dukes of Bohemia were buried here. In 973 a benedictine abbey was added to the church making it substantially bigger. Interestingly, it was the first monastery in the Czech lands and also the first female monastery, i.e. a convent. You can see the sculpture of the founding abbess Mlada on the upper part of the façade (on the left under the relief of St. George), next to the sculpture of duke Vratislaus I (the founder of the Basilica) on the right.

Architecturally, the church is still Romanesque inside, with two Romanesque towers outside nick-named Adam and Eve. Entering inside feels like traveling back in time. The front of the church was added in the 17th Century and is Baroque. On the eastern side of the Basilica there is also a beautiful 16th century Renaissance portal depicting Saint George slaying a dragon. The entrance to the church is paid, you will need a ticket for Circuit A or B to get in. Apart from sightseeing, the church also offers regular classical music concerts. 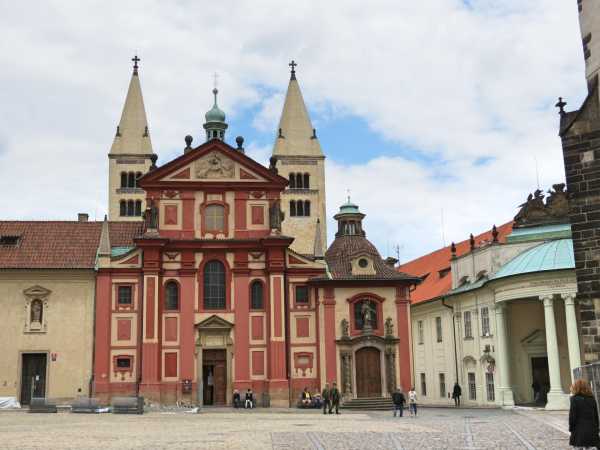 The Rosenberg Palace was constructed in the 16th century by the Rosenberg family. In the 18th century the building was reconstructed from Renaissance into the Baroque and Classicist style by Maria Theresa who decided to make it the Institute of Noble Women, a Catholic monastic chapter for impoverished unmarried women from aristocratic families. The first abbess was Maria Theresa’s own daughter Archduchess Maria Anna of Austria, who was highly intelligent but physically disabled.

The exhibition, which you can visit in less than half an hour, is less impressive than the rest of the Castle but we still recommend to have a look if you have the Circuit A ticket. The exhibitions include a couple of rooms with old furniture, paintings or dresses of the noble ladies. The most impressive is the Chapel of the Assumption with illusive murals and an amazing fresco on the ceiling depicting the Holy Trinity. 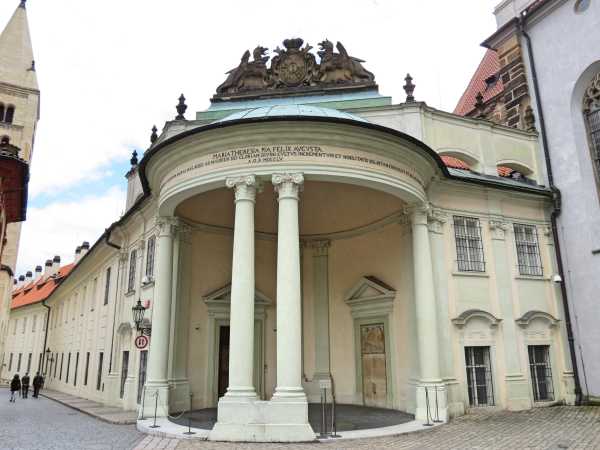 The Golden Lane is little street full of colourful houses, each of them a little bit different, dating back to the 16th century, Some of its first notable inhabitants were archers protecting the castle. When the garrison was discontinued in the 18th century and the houses were sold off to the poor, some unusual people started to live there including magicians, fortune tellers, soothsayers. They created an aura of mystery that, together with the romantic character of the place, attracted many famous 20th century intellectuals including Franz Kafka, who wrote the collection of tales “Country Doctor” in house no 22. Next to the archers the houses were also inhabited by goldsmiths, hence (most probably) the name Golden Lane.

The place is available for free after the opening hours of the castle museum (4pm in the winter, 5pm in the summer tourist season). Amongst the most interesting interiors are the archer’s house, the goldsmith’s house, the weaver’s house or a narrow corridor with a collection of old armours. 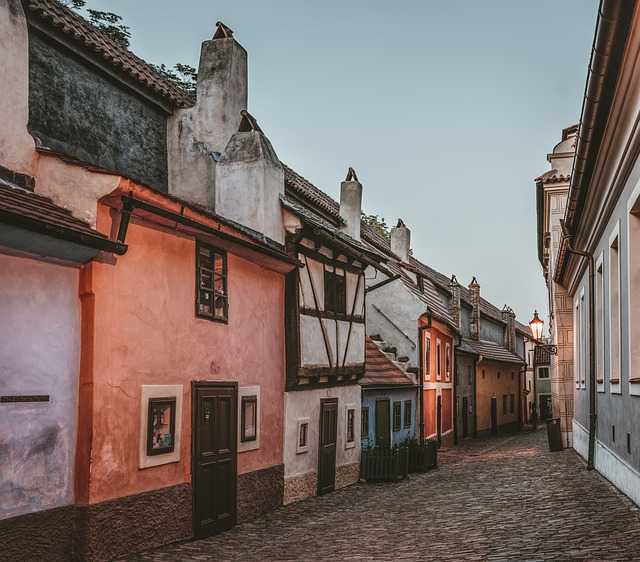 Take the stairs down at the end of the Golden Lane to reach Daliborka, a medieval prison from the end of the 15th century. It’s first prisoner was Dalibor of Kozojedy, hence the name. The tower offers an interesting insight into a medieval torture chamber. You will see amongst others a deep dark hole in which the prisoners were hang in a metal cage and many instruments of torture. The exhibition is quite small but worth visiting on your way out of the castle, it is part of Circuits A and B. We do not recommend this attraction for families with sensitive children, as it might cause some nightmares. 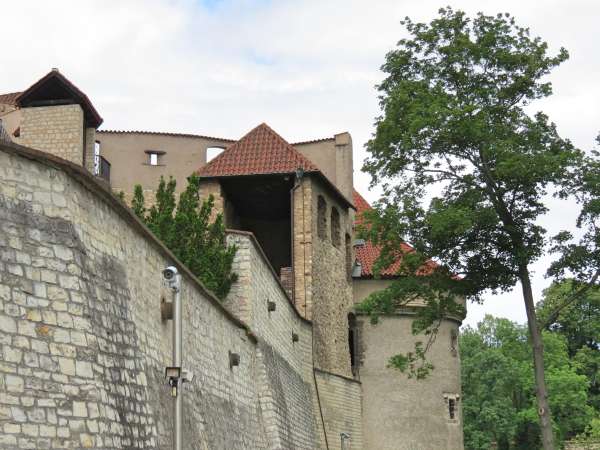 The Lobkowiczs are one of the oldest noble Czech families and their story reflects our difficult history. In the 20th century they had their property confiscated by the Nazis, then again by the communists, when they took over in 1948. The family only returned from the exile after the Velvet Revolution in 1989 and received their property back in restitutions. One of the properties the Lobkowiczs received back was a palace in the Castle, which they decided to open to the public.

The exhibition contains some of the best examples of the family’s impressive art collection including paintings by Breugel, Velázquez or Canaletto, many beautiful ceramics, old weapons and armors, manuscripts by famous composers such as Mozart and Beethoven, etc. As dog lovers, we particularly recommend the “Dog Room” with portraits of the four-legged members of the Lobkowicz family.

A great plus of the visit is the audio-guide recorded by prince Lobkowicz himself, explaining the importance of different exhibits for his family. There is also a café, which has an outdoor part with an amazing panorama of Prague. A great place to finish your visit in the castle. The Lobkowicz Palace is not part of the Castle Museum and requires separate tickets. 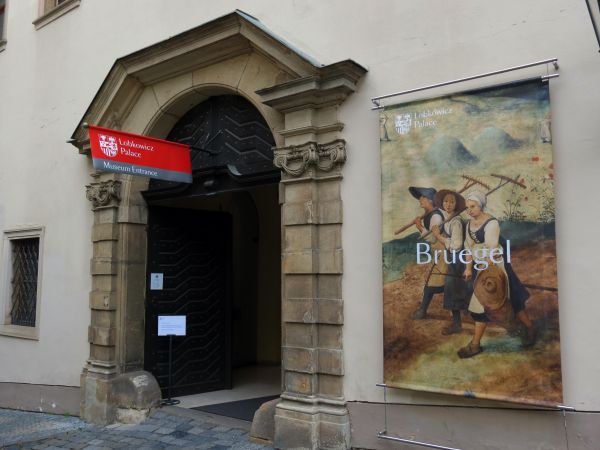 If you are thinking about visiting Prague Castle, you should definitely also read the Frequently Asked Questions about the Castle where we have presented details of different admission tickets. Also, remember you don’t have to visit the castle on your own. Join our free walking tour on which we visit the Castle together with the Charles Bridge every day.